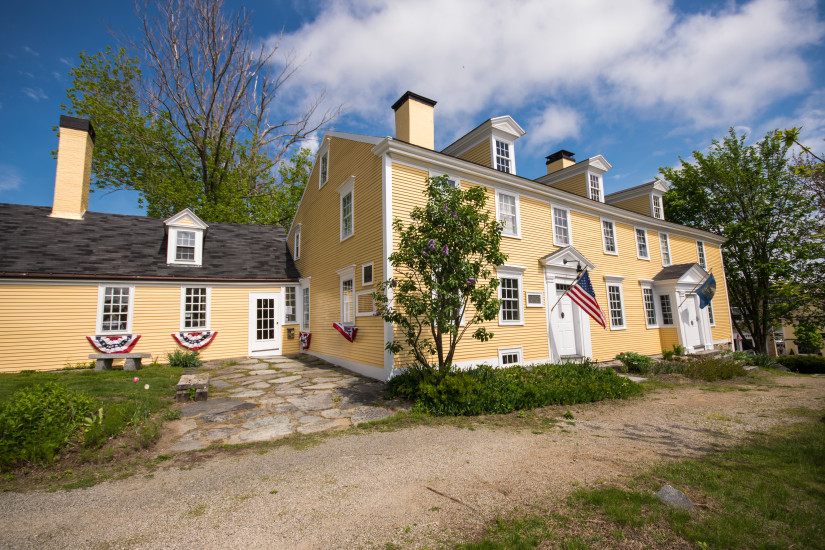 Founded in 1991 as a nonprofit entity and a founding member of the New Hampshire Heritage Museum Trail, the American Independence Museum in Exeter is celebrating the 300th anniversary of its Ladd-Gilman House this season. Built by Nathaniel Ladd in 1721 as a brick structure in the Georgian style, the house was deeded to Nathaniel’s sons, Elias and Josiah,who shared the house with their respective families.  In 1747, Daniel Gilman bought the eastern part of the house from Elias — and in 1752, he added an addition to the eastern side.

“The new addition was constructed with clapboards and the rest of the brick structure was clapboarded to maintain a consistent appearance,” said museum Curator Jennifer Carr, who has conducted extensive research into the structure. By 1777, the entire house belonged to the Gilman family. In the early nineteenth century, the house was again enlarged when John Taylor Gilman had an existing structure moved from another part of town and added to the western side of the house. Possibly used by the Gilmans as a summer kitchen, the addition is now the museum’s gift shop.

In 1902, the house was sold to the Society of the Cincinnati in the State of New Hampshire, and it became their headquarters. The Society added a caretaker’s cottage to the western side of the house, which now serves as the museum’s offices and library.

Today, the Society owns the Ladd-Gilman House and Folsom Tavern (c. 1775) as well as the 3,000+ objects in the museum’s collection, which includes an original copy of the Declaration of Independence—known as a Dunlap Broadside. “This discovery led to the museum’s formation,” explained museum Executive Director Emma Stratton, who said the Ladd-Gilman House served as the actual home to many influential persons in NH’s initial history.

According to New Hampshire Heritage Museum Trail President Jeff Barraclough, the Ladd-Gilman House is one of many such structures on The Trail. “If you have an interest in architecture and culture—from the mid 1600’s through today—you will find it on The Trail,” he said. “We are excited about the anniversary of the Ladd-Gilman House and invite people to learn more about it.”

The American Independence Museum is one of more than 15 museums on the New Hampshire Heritage Museum Trail, which is divided into the Seacoast, Merrimack Valley and Lakes Region. Member institutions are located in Canterbury, Concord, Dover, Exeter, Laconia, Loudon, Manchester, Moultonborough, Plymouth, Portsmouth, Tamworth and Wolfeboro.