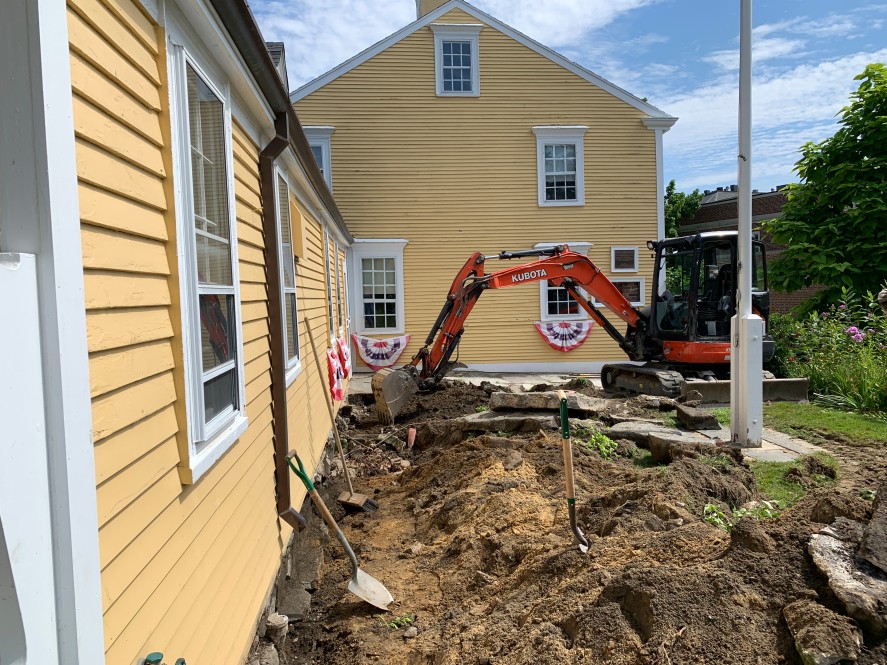 Recently, Castle Preservation Society (CPS) in Moultonborough received a grant from the Land and Community Heritage Investment Program (LCHIP), the second such award for museums on the NH Heritage Museum Trail in the past year.

“The LCHIP program is significant because it enables nonprofits like CPS to tackle important preservation projects that will benefit countless numbers of visitors for many years to come,” said Charles Clark, CPS executive director.

Emma Stratton, executive director of the American Independence Museum, which was awarded $80,000 earlier in 2019, agreed and said LCHIP funds have been used to address foundation and drainage issues on its Ladd-Gilman House (c.1721).

“We removed a 20th century deteriorating concrete skirt, repaired mortar between the foundation stones and regraded around the Ladd-Gilman House,” she said. “We also created an underground drainage system, added storm doors, repaired rotten door sills, rebuilt a historic stone wall and installed the beginnings of a pathway between our two historic buildings.”

This other structure on the campus of the American Independence Museum in Exeter is Folsom Tavern (c.1775).

“In the spring,” added Stratton, “we hope to continue our work to connect the pathway between our buildings, regrade the green space on our campus and finalize more intensive foundation repairs.”

Noting their award was $51,875, Clark said LCHIP funds will be used to support restoration of the exterior of the North tower at Castle in the Clouds. This project, he explained, will include repairing failing mortar, restoring wooden rafter tails and window framing, and installing a new replica balcony of the 1914 original.

“While repairing the mortar, each stone in the tower’s facade will be re-pointed, which involves removing each one and carefully numbering and photographing their placement to ensure each return to its original position,” he explained.

In restoring the timber framing, Clark said they will save as much original detail as possible, according to Secretary of the Interior’s standards for historic restoration.

“For non-salvageable portions, all replicated timbers will be skillfully handcrafted out of solid oak, including scalloping details,” he added.

According to both executive directors, the LCHIP grant created leverage opportunities.

“Combined with several other grants we have received, it unlocks a challenge grant from the Steinwachs Family Foundation that allows the project to be fully funded,” said Clark.

Stratton added, “An award from LCHIP is a testament to the importance of a project and, as a matching grant program, helps the visibility of a project when approaching additional funders. This grant was an incredible opportunity for the American Independence Museum, as we approach the Ladd-Gilman House’s 300th anniversary in 2021.”