In the Merrimack Valley portion of the NH Heritage Museum Trail, the Millyard Museum recently unveiled a new exhibit, “Manchester and the Great War,” which is open through the end of the year.

The exhibit’s run coincides with the 100th anniversary of the Armistice that ended the Great War on Nov. 11, 1918. According to John Clayton, executive director of the Manchester Historic Association, which operates the museum, items in the exhibit will include everything from weapons, uniforms and flags to photographs and other ephemera.

“The exhibit explores the impact of World War I on the city of Manchester and the many men from the community who took part in the conflict,” he said. 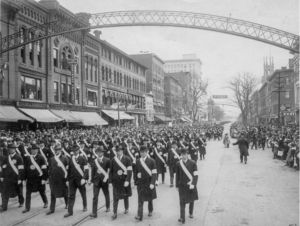 (The caisson bearing the flag-draped casket of Lt. William H. Jutras was the focal point of the somber funeral ceremony that was held at St. Raphael’s Parish in Manchester in 1921. Manchester Historic Association Photo.)

Lead curator for the exhibit is Manchester Historic Association (MHA) Research Manager Daniel Peters, an Army veteran and Purple Heart recipient who was wounded in combat in Afghanistan.

“The first World War is really a forgotten topic in our society,” said Peters. “More information is available about World War II mostly due to the large number of veterans who are still around. World War I participants are gone now, and history dies quickly if there isn’t a direct link to the days of the past.”

Each Saturday during the month of November, the Millyard Museum will host screenings of World War I films such as “Sergeant York,” Paths of Glory” and “All Quiet on the Western Front” to provide additional context on the Great War.

According to Mike Culver, president of The Trail and executive director of the Wright Museum of WW II, exhibits like“Manchester and the Great War” serve a deep purpose.

“The Millyard Museum, like all the museums on The Trail, helps provide a deeper context into various events throughout history,” he said. “There is also more to history than initially meets the eye, which makes The Trail such a fascinating resource for the state.”

The 15,000 square foot Millyard Museum features the permanent exhibit, Woven in Time: 11,000 Years at Amoskeag Falls, that tells the story of Manchester and the people who have lived and worked here.

For more information on “Manchester and the Great War,”visit www.manchesterhistoric.org.